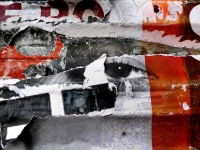 ”Society constructs walls which mark the limit and restrain because of the impossibility to recognize that which constitutes a valid and different contribution, which permits expansion and the discovery of other possibilities and the unveiling of what is latent. The walls protect us from the strange, the unknown, from the outside. They isolate us and reduce the scope of our vision from all that which we could entertain as possible, diverse and unique. The encoding of what we could know, its’ normalization and standardization create a new frontier from the possible, sharing reality between the adequate and inadequate, the acceptable and reprehensible. The all in the first and the rest in the remaining.”

”And the work of Vicente Pla Martí in his proposal “Posters” speaks of this remnant. A wall which in the face of the normative and structured, the beautiful and ideal, explodes through a collective authorless collage where the passage of time, the constant change, frenetic circulation of events, news, people, slogans and advertising brands are revealed as that other in the temple of modernism. And it is precisely in the city street, in the neurological center of transmission of the modern, in that space constructed on the downfall of tradition and legendary era, where Vicente’s wall emerges as an authentic alchemic melting pot, in which the fragments, remains, the pieces of what once had a functional, defined, structured and directed use are mixed, shaken and robbed inorder to create a new meaning, and claim it is still possible to shatter into a thousand pieces the pedestal where the universal, unilateral and univocal vision of reality lies.”